The Amulet of Yendor is found on level 26 of the Dungeons of Doom. It appears as an ankh. It is your quest to retrieve the Amulet and you cannot escape the Dungeons of Doom without it. In previous versions of Brogue, if you did not collect it on level 26, it could also be found on every subsequent level until you finally picked it up, but as of 1.7.4, the Amulet can only be found on D26. A potion of detect magic will reveal its location. Alternatively, you can use a Scroll of Magic Mapping and head for the statues: it will be near one of them.

While it is in your inventory, you lose nutrition at around 1/5th of your normal rate.

The Amulet is placed at random on the level with no special guards or defences to stop you from taking it. However, picking it up spawns the Warden of Yendor, an invulnerable monster that will chase you until you escape the dungeon. 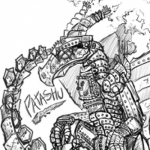